The UP-971AD is a compact black and white printer designed for use with both analogue and digital radiology imaging systems such as mobile C-arm, ultrasound, cardiac catheterisation laboratory and other compatible medical imaging systems.
Smaller than its predecessor (the UP-970AD), it provides high-quality hard copies of still images captured by the imaging system, that can then be used as reference prints for patient record purposes or referrals. (Please note that images printed from the UP-971AD are not to be used for diagnosis).
Printing options are expanded with a choice of Multi-picture modes for multiple images on a single sheet, plus a panoramic printing capability to produce extra-wide images.
Wireless Printing Capability
By using the optional UPA-WU10* Wireless Print System, you can achieve cable-free connection between the Sony digital printer with 5V USB output port**, mobile C-arm and other hospital imaging modalities.
* Product availability of the UPA-WU10 may vary according to the sales area.

Accepts both digital and analogue video input signals
The UP-971AD can receive digital as well as analogue signals, allowing the printer to support both types of C-arm system. It also can receive signals from two different integrated systems – i.e. analogue from a C-arm and digital from an ultrasound system.
More compact, more visible
The UP-971AD has a compact design with dimensions of approximately 316 (W) x 132.5 (H) x 265 (D) mm (12 1/2 x 5 1/4 x 12 inches) – 40mm smaller in depth than its predecessor. At the same time, the size of the LCD display panel is increased, and the control panel features a white LED backlight that offers clear visibility regardless of ambient light levels.
Multi-picture modes
As well as printing a single picture, the UP-971AD also offers a choice of two-, four- and six-way split printing of images on a single sheet when connected to an analogue video signal. The ‘Multi’ button on the front panel allows quick switching between ’Single-picture’ and ‘Multi-picture’ modes. With digital input signals, the printer can provide two or four split pictures on one sheet (NB: Multi button does not function with digital input).
Quick guide print
Quick instruction guides for different print operations can be selected, via the front control panel, and printed out for your easy reference so that you do not need to refer to the user manual.*
*English only.
Compliance with Medical Safety Standards
This product is distributed to the US and EU as a medical device and satisfies product safety standards (e.g. IEC 60601-1).
High quality printing
Using Sony’s direct thermal printing technology, the UP-971AD delivers photo-quality black & white prints with a high resolution of approximately 325 dpi.
High speed printing
In standard mode, the UP-971AD can deliver a print in approximately 8 seconds.
Enhanced operability
All function keys of the UP-971AD are located on the front panel, allowing easy setup and operation when the printer is installed in a medical cart. In addition, separate knobs on the front panel allow easy adjustment of both contrast and brightness and an auto lock function that prevents inadvertent alteration of settings.
Panoramic printing
When connected to a digital signal, the UP-971AD can produce panoramic prints up to a maximum of 600mm long.
Visual print quality control
Optimum print settings can be compared and chosen from a ‘collage’ print of nine pictures with different values for brightness, contrast, tone or sharpness.
Wireless Printing Capability*
The optional UPA-WU10 Wireless Print System allows cable-free connection between the UP-971AD and surgical endoscopes, ultrasound systems, and other hospital imaging modalities. This is ideal for busy clinical environments, where modalities are constantly being moved between different OR and treatment rooms. This all-in-one wireless printing solution also resolves the problem of limited space on medical carts, allowing connection between a medical imaging modality and an ‘off-cart’ printer without requiring a lengthy USB cable.
* This function is available to Sony digital printers with USB 5V type A Output port. 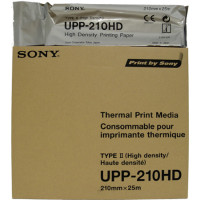 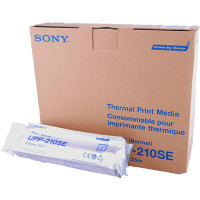